Kando Nakatomi might just be the meanest, gruffest, angriest fighter you could hope for.  Hardened by years of fighting and training to the south in the region known as Handies Peak, Kando gives the orders, and doesn’t take them.  Kando joins the Longtails after a tragedy, and while his band must learn to follow his orders, he must also learn to bring them together as a team.

Kando was born of my desire to have classes within the world of Longtails which didn’t always follow the usual European tropes.  I often find that I don’t really write strong male characters that are also out to do the right thing.  I guess I just assume that if you’re tough and in charge, you’re probably a jerk.  Kando was my chance to change that…at least to some degree.  What I love about writing Kando is that his goals aren’t always obvious.  He’s a mystery, and he opens the story up to a larger world, rather than just our smaller view of the Mouselands.

THE THREE TRIBES OF HANDIES PEAK

Kando comes from a region far to the south known as Handies Peak.  This peak overlooks a vast valley known as the Grizzly Hills.

Exerpt from The Storms of Spring:

Long ago, a nomadic group of mice had stumbled upon what they believed to be a monastery in the Grizzly Hills to the south. In reality, it had served as a human dojo for a myriad of martial arts. After researching the ways of the people who had once studied there, they had adopted many of the traditions into their own culture. Since then, the nomads had divided into three clans, the Demons, the Ghosts, and the Ascended.

Demons, which is the class that Kando falls into, are based heavily on Samurai, namely their helmets which makes them look a bit like a demon. Demons are trained more for brute strength and defensive arts.  They also typically wield a katana as well as a smaller wakizashi blade – all mouse-sized of course.

Ghosts are based more on Ninjas.  They have a strong focus on stealth and assassination.  Ghosts are operatives and more lone wolves.  You’d be hard pressed to get one of them to join the Longtails, or any team for that matter. 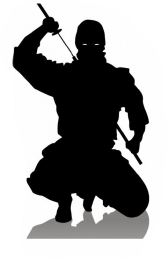 The Ascended are the keepers of Handies Peak, and the only one of the three clans to wield a form of magic, known as chi.  This is actually quite similar to the Golds, a class of healers common among the Longtails and the Mouselands.  Much like differing religions, they actually both draw their power from the life force of the Earth itself, but just choose to call it different names. Ascended are strongly based on monks.

Perhaps one day one of the other two classes will join up with the Longtails adventures!